FR
Latest news
You are at:Home»Entertainment»Hollywood movie to be made base on a video game (Aurion) created by a Cameroonian 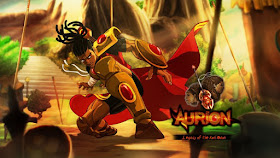 The African fantasy role-playing game Aurion: Legacy of theKori-Odan is getting the movie treatment via Good Fear Film.

The company, run by Chris Bender and Jake Weiner, have picked up the rights to the game that was created by Madiba Olivier, the founder of Cameroon-based Kiro’o Games. Based on African mythology, Aurion follows the fallen heirs to the throne of a kingdom who are forced to embark on an epic journey, traversing the surrounding countries, building alliances with the diverse neighboring kingdoms and harnessing power emanated by their ancestors as they seek to fulfill their destiny as leaders and to reclaim their realm as king and queen.
The game was released on Microsoft Windows via Steam earlier this year.
Olivier had a dream of working in the gaming industry, but living in Cameroon presented major obstacles. With traveling to the U.S. not an option due to a lack of funds, he learned to code and design games and, upon graduating from the University of Yaounde in 2009, set about building a video game company. His achievements got the attention of the U.S. State Department, which selected him to participate in the 2016 Mandela Washington Fellowship Program, launched by President Barack Obama as part of the Young African Leaders Initiative.
“This is an incredibly unique entry into the fantasy genre and we are as inspired by Madiba as we are in the world that he has created,” Bender and Weiner said Monday in a joint statement.

“My team and I are very excited to see our game become a movie in Hollywood. It is something we’ve dreamed about since the beginning,” said Olivier in a statement.
Bender is known for such comedies as We’re the Millers and Vacation, but he has also tackled other genres and is one of the producers behind Disney’s live-action Mulan redo.
Weiner is a producer on Under the Silver Lake, the latest project from It Follows filmmaker David Robert Mitchell, and also is working on Mulan.
The trailer for the game is seen below.