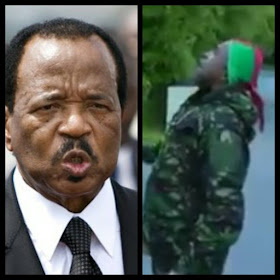 It has been more than two weeks now since Paul Biya’s participation in the 71st UN General Assembly in New York.

While other presidents were returning home to run their countries, president Biya on the other hand took off for Geneva where he is known to spend millions on hotel bills, relaxation and shopping!

According to the World Bank, Cameroon is the most indebted country in sub-Saharan Africa and Cameroonians are worried at the amount of time president Biya spends out of the country especially when Cameroon is at war with Boko Haram.

A brave Cameroonian took it upon himself to call out Biya at the Intercontinental hotel in Geneva. This is not the first time he is confronting Biya at the hotel.

Share. Twitter Facebook Google+ Pinterest LinkedIn Tumblr Email
Previous ArticleHollywood movie to be made base on a video game (Aurion) created by a Cameroonian
Next Article Samuel Eto’o & Mounkandjo, Shortlisted for 2016 African Player of The Year